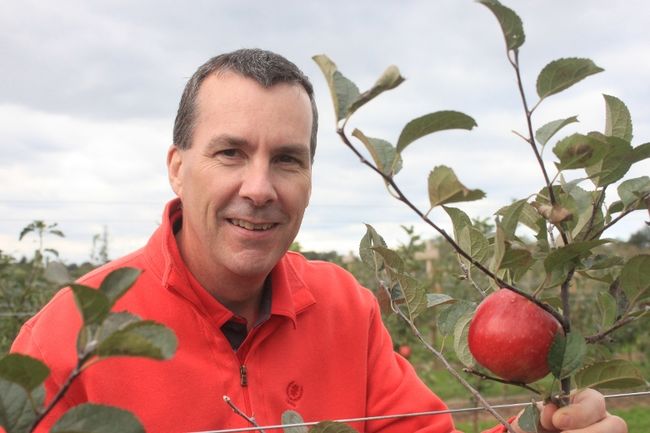 They're a harbinger of fall and promise to keep you and your doctor strangers.

And somewhere in a stand of 11,000 trees on the Vineland Research and Innovation Centre farm, there's an apple — or two — in the works that will be a beacon of flavour and juiciness, and give consumers something new into which they can sink their teeth.

At least Daryl Somers hopes so.

The director of applied genomics at the research centre has spent the past four years primarily breeding the hugely popular Honey Crisp with the apple of Queen Elizabeth's eye, the Royal Gala. He's doing it in a quest to develop a made-in-Ontario variety that will grow well for local farmers, who saw a bite taken out of this year's crop because of another late spring frost, and will win the approval of apple fans' taste buds, much like its parents Honey Crisp and Gala have.

"There are some good varieties, but we can get better," Somers says. "As a research organization, we'd like to be in the market with an apple we've produced. We have a phenomenal growing region for apples. We grow very, very good apples. We should get apples more adapted to our environment... from this program here."

Right now, though, he and his team are a long way from finding it. And for their work to come to fruition, they can't be sentimental.

Even fewer of those will make it to the next stage, weeded out by how well they grow and fare against the elements, and eventually how they hold up in taste tests.

Last week, Somers and his fellow scientists gathered to sample the very first fruits of their labour from those earliest trees started in 2011.

"It's a little surreal. You're tasting something no one else has tasted," Somers said of the experience. "What's it going to taste like? It's exciting. There are those that taste very good and then there are those where it's 'Wow, that's nasty.' The best of the best is rare."

Just how nasty were those bad apples?

"You take a piece and it's like eating a raw potato," he said. "There were those that were sweet and juicy and red, and it was 'Wow, that's a really good apple."

The "gross" apples get yanked immediately from the test orchard and will eventually be replaced by new candidates. Somers plans to grow the Vineland orchard to 25,000 apple hopefuls, though fewer than 10 of those may ever wind up on store shelves.

Those that passed last week's taste test get to stick around. Eight trees of the standout varieties will be grown, which take about five to six years to mature. If the fruit they produce at that point continues to impress, the trees are tested on farms.

By the time the winner has reached the finish line, as many as 20 years could pass — only 12 in the best case scenario — and Somers will have retired. But again, he's not getting sentimental.

It sounds like a game of chance to get Honey Crisp and Gala to produce the next golden child of fruit but Somers does have a clear idea of what he's after.

Data gathered by the research centre's consumer insights program show that 89 per cent of consumers prefer red apple flavour — sweet and juicy — to the tartness typically offered by their green cousins.

Keeping that in mind, Somers has mapped the DNA of 70 apple varieties and has identified specific genetic markers for the traits consumers prefer. Somers will use those markers to hone in on potential candidates with the most appealing qualities.

But with so many varieties filling supermarket bins at this time of year, including the hip Honey Crisp and (my favourite) Ambrosia, which was a chance seedling created in a British Columbia orchard by master plant breeder Mother Nature, do we really need another apple?

The answer is a resounding yes from Kelly Ciceran, general manager of the Ontario Apple Growers, which is a partner in Somers' work. After all, that stalwart, McIntosh, has been around more than 100 years and Honey Crisp is starting to get to get a little stale since its release in 1991 after 30 years in development.

"We want to grow for the marketplace and tastes are changing. It's evident in produce aisles," she said, pointing to pluots and plumcots, those cool kids of the plum and apricot. "People want to try new things."

And farmers want to grow them, she noted. "We'll figure out how to grow it. We just want people to love it."

So Somers presses on because he knows even the apples du jour have a limited shelf life.

"It's like fashion. People like change and what's new," he said. "Honey Crisp and Gala have been around a long time. They won't be around forever."

Tiffany Mayer is the author of Niagara Food: A Flavourful History of the Peninsula’s Bounty (The History Press). She also blogs about food and farming at eatingniagara.com. You can reach her at eatingniagara@gmail.com or on Twitter @eatingniagara.

You can view the original article here: http://www.stcatharinesstandard.ca/2015/10/20/eating-niagara-seeking-the-ideal-apple