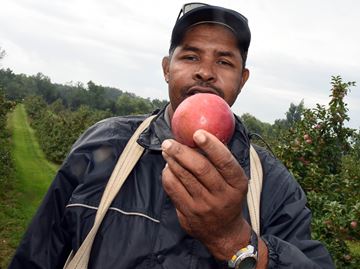 The extreme temperatures this summer have yielded a sweeter than normal apple crop in Ontario – including in Flamborough – but while the apples are numerous, they’re generally smaller in size.

Charles Stevens, the chairperson of the Ontario Apple Growers Association, said this year’s is one of the sweetest apple crops he’s ever seen.

“We’ve had more sunshine this summer than I’ve ever seen in my life,” he said, noting sunshine is necessary to turn starch in the apples into sugar. “They are tasty, for sure.”

He added that the apples are smaller, due to the heat.

“There’s no doubt about that,” he said. “There was perfect conditions for blooms, it was a heavy crop and then it turned hot and dry.

“That combination wasn’t good, but if you managed to thin down your crop really well, you probably got some decent size,” he continued. ‘But I think, overall, size will be down a little bit.”

Bob Myers of Myers Apple Farm in Copetown said the orchard is one that has bucked the trend.

“We’ve probably got one of the nicest crops we’ve had in six to eight years,” he said. “We must have got the rains at the right time.”

Myers noted while the odd variety of apple is a bit smaller, overall the apple size is excellent.

“They could get there too,” he said.

One thing that may have helped the Copetown orchard with fruit size, said Myers, was hand-thinning the apples twice.

“If there are five apples in a clump, we’ll go through them and knock them down to one or two,” he explained. “We normally only do that once, but this year we went through twice.”

While the orchard doesn’t have irrigation, Myers said he did water some of the smaller, traditional varieties.

“We’re amazed at the size we do have,” he said.

“Some of the apples that are normally quite sour are, certainly not really sweet, but they’re not quite as sour as normal.”

Myers began picking apples Aug. 12 and will continue picking into October. Their season runs until Dec. 4.

While this year’s crop is good, Myers said he is worried about bud formation next spring.

“Because of the dryness and the heat, that can also affect the trees for next year,” he said, noting if the trees are under stress it can lead to a lesser apple crop. “That’s another reason we went through and hand-thinned – to give the trees a little relief.”

“For this year, everything is very good, quite surprising.”

In terms of the smaller size, Stevens explained that when the temperature gets to be higher than 30C, the trees shut down.

The Newcastle grower noted due to the heat, the trees stop producing the apple, instead focusing on surviving.

As a result, he noted, growers across the province lost two to three weeks of apple growth, making the crop a week late.

To combat heat, growers in hotter climates install misters or shade netting to lower the temperature, Stevens explained. However, as this is out of character for Ontario, it doesn’t make sense for producers in the province to invest in the measures.

“There are lots of apples, it’s just that the crop size will be down a little bit,” Stevens explained.

Drummond Farms is one of the growers hit by the smaller sized fruit. The orchard saw a good yield, but filling a bushel will take more apples.

“There’s a lot of apples but because it didn’t have any rain, they’re very small in size,” said Hugh Drummond.

He explained that one bushel normally equals 100 apples. This year, it’ll take 150 to fill a basket and as a result, the farm’s labour costs have gone up.

“It’s a gamble. Probably Las Vegas has better odds than the weather,” he said, noting that the 5th Concession East farm is too big to irrigate, so they rely on Mother Nature.

The farm has 100 acres of orchard and grows 20 different varieties of apples. On average, he said, the operation grows two million pounds of apples.

Drummond said that while this year is better than last year, when their yield was cut by 40 per cent due to frost, they still won’t have as many bushels strictly because of the size.

“Nothing’s really changed, just a lot more work for one bushel of apples.”

She said the dry weather may have made the work difficult at the 10-acre Parkside Drive operation, but they have had a good year.

“We have worked very diligently this spring and summer, to produce a healthy apple crop,” she said in an email.

“The drought lasted such a long time in our area, but our guys kept watering non-stop.”

She said while some of apples may be smaller than average, the watering helped with the size.

“On the whole, we’re pretty happy with the crop,” she said.

- with files from Julia Lovett